A sure sign in our community that summer is here is the Agricultural Fair. This year I was approached by the ambassador committee to join the rotation of photographers in the community who have the opportunity to photograph the contestants. I had so much fun with these girls!!! Although the main idea of the session was to capture their head shots, we also had some fun with the “dogs”.

Please meet the 4 lovely ladies competing for the 2011 crown.

Alanna Coneybeare, 18, of Listowel, is the youngest daughter of Ralph & Paulette Coneybeare. She is proudly sponsored by the Listowel Rotary Club. Alanna is currently employed part-time at Giant Tiger and is entering her fifth year of high school in September at LDSS. Alanna’s traveling bug was sparked when she went to India for one year on a Rotary Exchange and she now plans to enter a career involving foreign aide. She takes an active role at school and will represent Listowel as the school Senator next year on Student Council. Alanna thoroughly enjoys cooking and is always whipping up a new concoction in the kitchen. 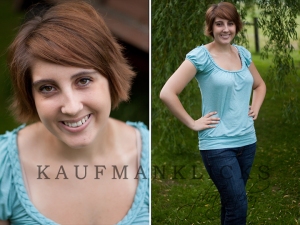 Kelsey Dewar, 18, is the daughter of Karen Dewar of Monkton and Jamie Dewar of Stratford.  She is proudly sponsored by Listowel Technologies Inc.  Kelsey is currently employed at Spinrite for the summer and the Bay, Conestoga Mall during the school year.  In the fall, Kelsey will be entering her second year at the University of Waterloo in the Environment and Business program.  During her senior year of high school she was involved with the Big Brothers & Big Sisters of Listowel and the Listowel Kinsmen Paddyfest celebrations.  During her freshman year at University, she was involved in open house days to inform future students of the experience.  Kelsey enjoys traveling, theatre, dancing like no one is watching and hanging out with her friends.

Tasha Hiemstra, 16, is the daughter of Kevin & Lisa Hiemstra of Atwood.  She is proudly sponsored by the Donegal Women’s Institute.  Tasha is currently employed at M&M Meats where she helps out with the Crohn’s and Colitis Charity BBQ.  She is also employed at Jubilee Farms she has a position as a milker.  Tasha will be entering Grade 12 in the fall at LDSS and wishes to pursue a career in the medical sector after high school.  Tasha enjoys camping, fishing and being outdoors in her spare time and she likes to pass on her smile to those around her. 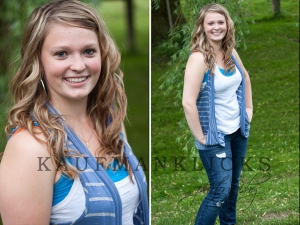 Kim Kieftenburg, 17, is the daughter of Frank & Ella Kieftenburg of Moorefield.  She is proudly sponsored by Heartland Animal Hospital & Veterinary Services.  Kim is employed this summer at Bakker Dairy as a milker.  The second oldest of 5 children, Kim will be entering grade 12 in September at LDSS.  After high school she plans to attend university or college and eventually go overseas to Africa to do relief work.  Kim loves to play sports, volunteer and bring laughter to everyone she meets.

The girls were easy to work with and willing to try things out. Especially with the looming thunderstorm. We had even more laughs while doing group shots.

I also had the opportunity to meet the 2010 Ambassador Miss. Destiney Carson.  She was there to help the girls with questions they may have and walk them through the days ahead.

Photographing the dogs was a little challenge but we had so many laughs along the way. All I can say is that this was a great experience for me, getting to know new people and a new organization. 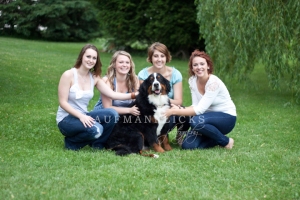 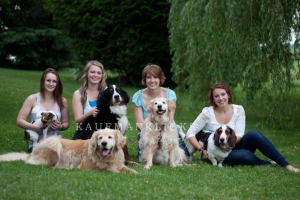 This Thursday these four girls will compete for the title of 2011 Listowel Agricultural Fair Ambassador. Honestly, they were all a lot of fun and I wish them all the best of luck.  I hope you can see the fun that we had through the pictures with the girls.  I encourage them to be themselves and have fun during the experience.

For your I hope you can make it out to have a “dog-gone good time” at the Listowel Fair!!!!